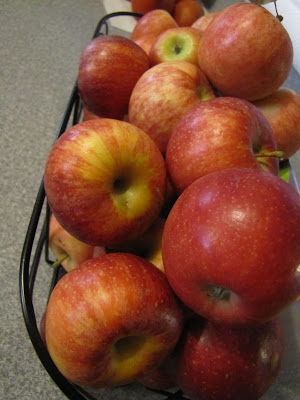 Apples: One of the best ingredients of fall. There is nothing better than biting into a fresh, juicy, sweet apple. These are Gala apples. They are on the sweeter side and I love baking with them. They are really good eaten plain, dipped in peanut butter, or eating with pop corn. Have you ever eaten apples with pop corn? If you haven't, it is a must. The salty pop corn is an awesome accompaniment to the apple. They are also very good dipped in ranch dressing. My mother makes an awesome apple salad. I wonder if I can twist her arm for the recipe, that way I can share with all of you.

The apple is a fruit that contains 83 to 93% water. Apples also contain Vitamins A, B, C, and Pentatonic acids. Vitamin C and the Pentatonic acids are found in the skin of the apple. One thing I always told my kids, "Never peel your apples. Slice them with the skins on."
Did you know that apples have a calming affect? It is known that an apple eaten before bedtime will help ease sleep. The juice of an apple is also calming too. The juice can be used to rub on the body to calm tenseness, and it also invigorates the skin. I wonder how many apples it would take to get a bathtub full of juice? I think that is just what I need, an apple juice bath.... 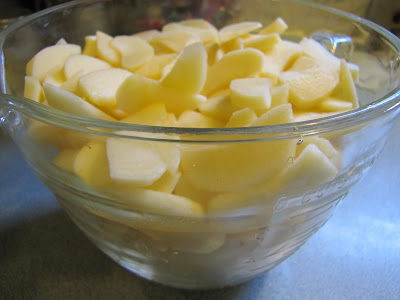 My apples were purchased from a local farm. They are Gala apples, and oh so juicy...

Yesterday I had a panic attack. I could not locate my apple crisp recipe. I have a folder that holds all of my favorite TNT recipes. It was not in there!! I promised Sean some apple crisp, so my time was limited. I searched and searched for that recipe until I finally gave up and turned to Allrecipes.com. I found a recipe that sounded appealing, but when it was completed I was very disappointed. As you can see from the picture below, the apples look dehydrated. I am a fan of juicy apple crisp, not dry. This recipe also has a crust on the bottom which I thought was kind of odd. Usually apple crisp just has the crunchy topping. I am going to share this recipe, and you can form your own opinion.
This morning I CALMLY located MY apple crisp recipe and I will share that one with you also. I don't know how it happened, but my recipe was stuck inside a cookbook. One of my priorities is to create a filing system for my recipes so I don't have to panic anymore. Now that my apple crisp recipe has been located, I can throw my compromised version away. 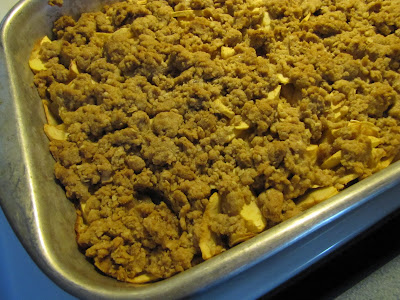 The only way I could eat this apple crisp was by placing it in a bowl and dowsing it in milk. Sean liked it though, he ate his with vanilla ice cream (yuck!). Yes, I am not an ice cream fan. Odd, huh? 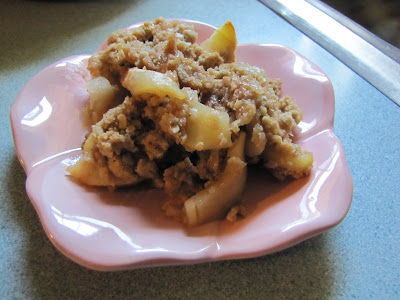 Posted by Alil Country Sugar at 7:34 AM

Email ThisBlogThis!Share to TwitterShare to FacebookShare to Pinterest
Labels: Pies