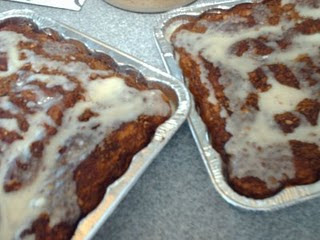 I have had a lot of requests for this recipe. Look Carol, it is finally here. This cake was perfect, and I didn't have to make any changes to the recipe. I can't recall the exact location of this recipe, so I won't be able to reference it. If I had to take a guess, it was from http://www.allrecipes.com/.
Here is the Cinnabon story: Cinnabon is the world-wide leader in the cinnamon roll bakery business. It was founded in Seattle, Washington in 1985, and Cinnabon opened its first bakery on December 4, 1985 at the Sea Tac Mall. Cinnabon started their business by selling their most popular cinnamon roll only.
Cinnabon bakeries have built a reputation for serving fresh, aromatic cinnamon rolls made with premium Indonesian cinnamon and topped with a sweet, rich, cream cheese-based frosting. Every Cinnabon product is served hot out of the oven and baked fresh before their guest's eyes. Just to throw in a little tid-bit of information from me....my dream restaurant is to have a kitchen behind glass so all my customers can see their food being prepared. Just a dream of mine....
The Cinnabon bakeries have grown with the products they offer. They started with a single product (the Cinnabon cinnamon roll), and they are now serving beverages, Pecanbons, Cinnamon stix, coffee, and their new recent line, varieties of cupcakes.
Here are the top 5 health benefits of Cinnamon:
1. Cinnamon has anti fungal, antibacterial, and atiparasitic properties. Which means that cinnamon has been found to effective in fighting vaginal yeast infections, oral yeast infections, stomach ulcers, and head lice.
2. Cinnamon has anti-inflammatory properties. So when you eat fried, fatty, processed foods (which cause inflammation to the internal tissues and organs (heart disease)), just eat cinnamon and it should take care of the inner inflammation.
3. Cinnamon may help people with Type 2 diabetes control their blood sugar levels, and cinnamon my also lower LDL "bad" cholesterol.
4. Cinnamon is an excellent source of manganese, dietary fiber, iron, and calcium.
5. If that's not enough, there have been studies done that show that just the smell of cinnamon improves memory, and performance of certain tasks. (I am going to purchase a cinnamon candle for in my computer room where I go to school).
Do not start eating cinnamon in large amounts just from reading these five health benefits. If cinnamon is consumed in large quantities it could possibly be toxic.
I am not a cinnamon fan, but this cake makes me think twice.
Cinnabon Cake
1 box yellow cake mix
1 c. sour cream
3/4 cup oil
4 large eggs
Filling:
1/3 c. honey
1/3 c. packed light brown sugar
1 TBS ground cinnamon
1/3 c. finely chopped pecans
Sugar glaze:
2 c. powdered sugar
1/3 c. milk
1 tsp. vanilla extract
Place rack in center of oven. Preheat oven to 350 degrees F. Lightly spray 13x9 inch baking pan (I have used two 8 or 9 inch pans). Place cake mix, sour cream, oil, and eggs in mixing bowl. Blend well with mixer. Beat on low for 1 minute. Scraping sides of bowl. Mix on high until well blended. Pour into pan. Drizzle honey on top, then sprinkle brown sugar, cinnamon and pecans.
Bake 38 to 40 minutes until golden brown or until it springs back when you press lightly with fingers. Remove from pan and place on wire rack to cool. Place glaze ingredients in mixing bowl and stir until well blended. Pour over top of warm cake. Allow to cool 20 minutes before cutting. Store covered with plastic wrap at room temperature for up to 1 week.
Good luck~Happy eating~Enjoy
Posted by Alil Country Sugar at 9:23 AM

Email ThisBlogThis!Share to TwitterShare to FacebookShare to Pinterest
Labels: Cake