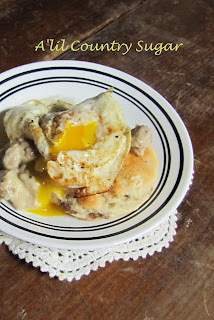 I was featured at Weekend Potluck.....Woop! Woop!

Okay, for starters.....Why did Google change things on Blogspot? Now I have to learn things all over again.....And I'm tired of learning! Can I get away with saying that in this day and age? Well, I said it!

To tell you a little bit about this recipe; I was given a challenge. And you know me and challenges, I love them. Bring it on baby! When it comes to food you can challenge me any day.

But anyway, the challenge was to see if I could create a sausage gravy biscuit. Yes, sausage gravy right in the biscuit. The requester said that she would like to have the good breakfast food portable.

And they are amazing. Did you see what I did with mine? I topped a biscuit with a little of the gravy and an over-easy egg. One great breakfast right there on my plate. But that's not very portable, is it? 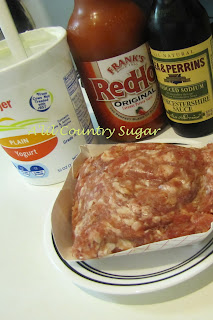 Alrighty then, you may have to follow along with this one. I will still post the recipe at the end of the post, but to give you an idea of what I did, following along might be a good idea. 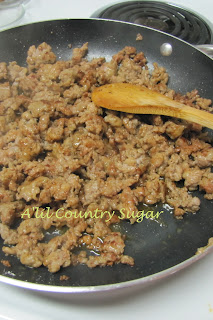 I browned 1 pound of fresh bulk sausage. When it was all the way browned I added tons of fresh ground black pepper and a little lavender pepper. I threw in some Worcestershire sauce and Frank's Red Hot. 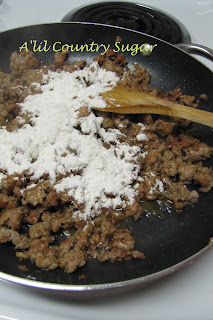 Whatever you do, do not drain your sausage. You need that fat, grease, lard, or whatever you want to call it for flavor, and will also help in the baking process.
I added some flour and stirred until it soaked up all the grease. 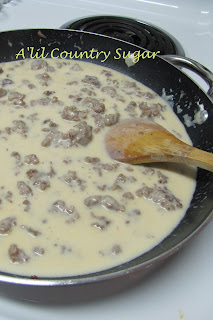 Then I added some milk. Don't forget this is going in the biscuit, not on top. So I didn't add as much milk as if I was making gravy.
After I added the milk, I simmered it for while just to let it thicken. I pulled it off the burner and left it cool to room temperature. 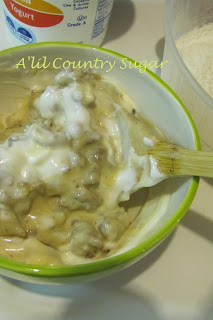 Once it was cool, I added some plain yogurt to some of the sausage gravy. 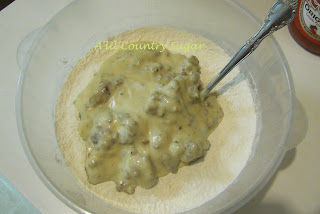 Dumped the mixture in my self-rising flour and pulled the four into the gravy. You don't want to over mix or they will turn out tough. 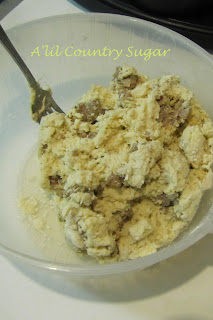 My dough has formed. They are ready to be patted and cut into biscuits. 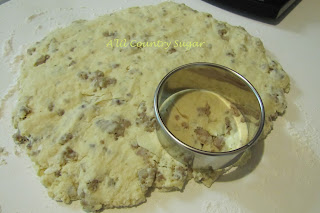 I used a two inch round biscuit cutter. 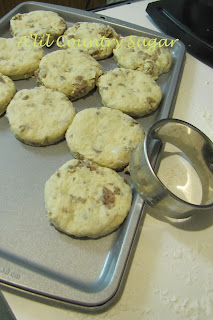 Placed them on a baking sheet with sides touching. I ended up with 10 biscuits. 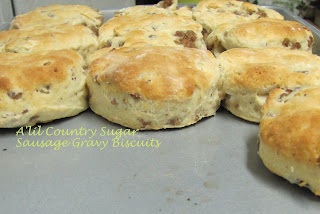 Aren't they gorgeous? And they taste awesome!
Challenge me again and see what I come up with. According to the person that challenged me, she said that she couldn't find any recipe for sausage gravy biscuits on the internet. So, does that mean I'm the first? 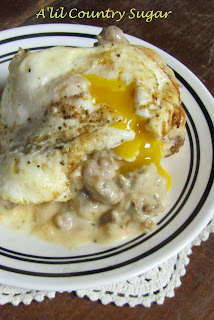 Here's another shot of that great breakfast I had.....And you can now wipe the drool from your chin.... 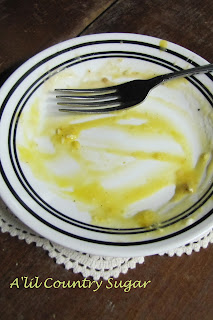 
This recipe is linked to:

For the sausage gravy:
1 lb. bulk fresh sausage
Lots of fresh ground pepper and a little lavender pepper
1 TBS Worcestershire sauce
1 tsp. Frank's Red Hot sauce
1/4 c. flour
2 c. milk
Brown sausage until done. Add peppers, Worcestershire sauce, and Red Hot. Add the flour and stir until all the greases are absorbed. Add milk one cup at a time stirring after each addition. Let it simmer until it thickens. Remove from heat and let it cool to room temperature.

Add the yogurt to 1 c. of sausage gravy. Stir together.

Preheat oven to 450 degrees F.
Place the flour and salt into a large bowl. Whisk them together. Make a well in the flour mixture and add the gravy mixture. Using a fork pull the four into the gravy until all the flour is moistened. Don't over mix.
Once a dough has formed, sprinkle a clean surface with flour. Turn dough out on floured surface, sprinkle with a little flour and fold dough in half. Pat dough to 1/2 inch thick. Flour again and fold dough in half. Pat dough into a half inch thick round. Dip a 2-inch biscuit cutter into flour and cut out biscuits. Place biscuits close together on a baking sheet. Bake 8 - 10 minutes or until golden brown. Serve warm.