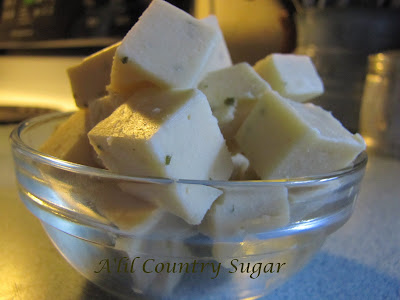 My evening snack. Garden Onion Cheese
Cheese is one of the most wide-ranging and subtle foods in the world. The many tastes of cheese can be bland, buttery, rich, creamy, pungent, sharp, salty, or lightly delicate. Cheese has many different textures also. It can be hard enough to chip in flakes, or so soft that it has to be eaten with a spoon. The aroma of cheese can be rank in some (and still be eaten with love), delicately aromatic, or virtually unnoticeable. Cheese is one of the perfect companions for wines, a satisfying finale to a gourmet meal, or simply as a basic family snack (my favorite).
The history of cheese goes as far back as 6000 BC. Whoa, that is a long time ago...Cheese is considered to be made in the Middle East. Here is a legendary story: cheese has known to be discovered by an unknown Arab nomad. He is said to have filled a saddlebag with milk to satisfy his thirst on a journey across the desert by horse. After many hours riding he stopped to quench his thirst, only to find the milk had separated into a pale watery liquid and solid white lumps. Because the saddlebag, which was made from the stomach of a young animal, contained a coagulant enzyme (an agent that produces coagulation) known as rennin, the milk had been separated into curds and whey. The hot sun and the galloping of the horse caused this process to take place. Thank goodness for this mishap, because if this wouldn't have happened, we would not have scrumptious cheese.
Little Miss Muffet
Sat on a tuffet,
Eating her curds and whey;
Along came a spider,
Who sat down beside her
And frightened Miss Muffet away.
I had to throw this in here since my post has to do with curds and whey. This rhyme first appeared in print in 1805, in a book titled Songs for the Nursery. Like most rhymes, the origins are unclear. Some think that it was written by Dr. Tomas Muffet, a sixteenth-century English entomologist, for his stepdaughters; others think that it refers to Mary, Queen of Scots, who was said to have been frightened by a religious reformer John Knox.
Did your parents ever have pet names for you when you were little? Ha, well mine was Miss Muffet. Don't ask me why; that's just what my mother called me.
Good Luck~Happy Eating~Enjoy
Posted by Alil Country Sugar at 6:19 AM