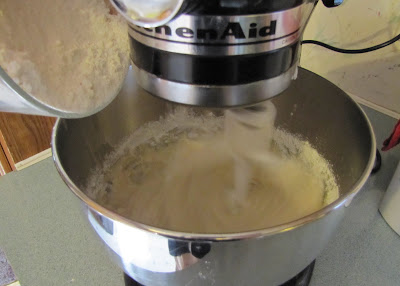 This is the mixing process. I am truly in love with my Kitchen Aid mixer. If a mixer can take over the bread kneading process, it for sure has my devoted love.... 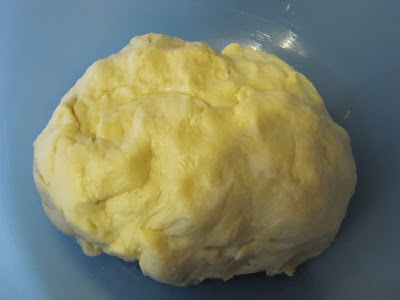 This is my dough before the first rising process. It was kind of sticky, and it's not suppose to be, but I put my faith in it and let the dough do its thing. 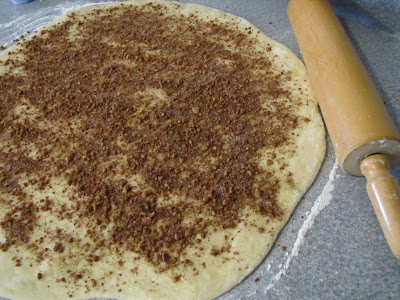 After the first rise, I followed the directions on the rolling out process. I thought I had enough flour on my surface, but when I started rolling it, the dough stuck to the surface. It was pretty easy to roll out though.
I would love to have one of those Food Network measuring boards. I guess I will have to put that on my Christmas list....So, children of mine; if you are reading my blog, hint hint... 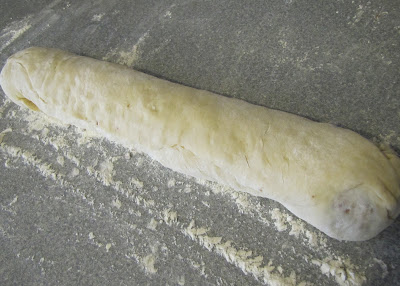 This is the rolled cinnamon roll log. It is now ready for slicing. 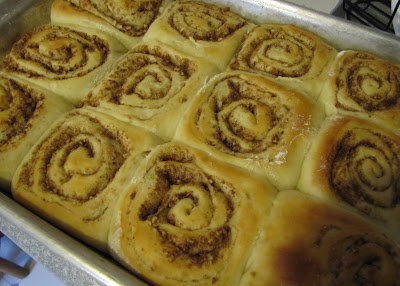 These are the cinnamon rolls after baking. Nice and golden brown. Are you ready for the next picture? 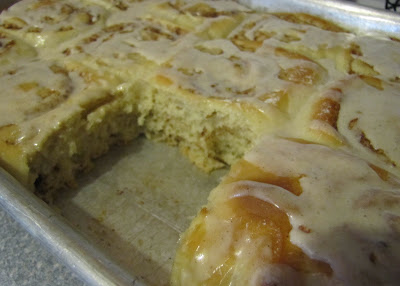 This is after they have cooled for five minutes and the glaze applied. Look, someone stole one already....I wonder who that could have been? 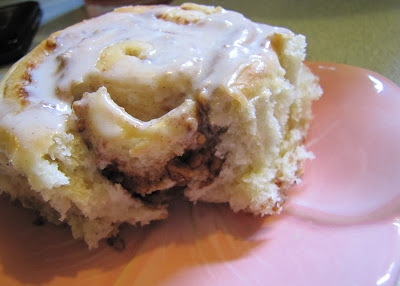 The completed cinnamon roll, taste tested, and approved. This is a very good picture to show how flaky they are. I have found my most favorite cinnamon roll recipe thanks to http://www.marzipanmom.blogspot.com/. I did make some changes though and I will give the recipe I used. If you would like the original, just follow the Web site link.
When cinnamon, sugar, and butter are mixed together; What is the result? Of course, people all over the world love the combination. Cinnamon rolls are a well-known breakfast pastry, but surely they can be eaten any time of the day. Did you know there is a history behind the cinnamon roll?
The first cinnamon roll was baked in Sweden where October 4th is known as National Cinnamon Bun Day. In Sweden the cinnamon rolls are social institutions that should not be missed. Cinnamon rolls are enjoyed during FIKA, a get-together with friends. The cinnamon rolls in Sweden are not as sweet and heavy as they are in the United States. The dough contains a hint of cardamom, a spice in the ginger family, and they are baked in muffin wrappers to make a more delicate treat. The Swedish name for the cinnamon roll is "kanelbulle". Kanelbulle means cinnamon bun.
Cinnamon rolls are known as a breakfast food in the United States. Philadelphia-style cinnamon rolls date back to the 18th century. The Philadelphia style cinnamon roll contains honey, sugar, cinnamon, and raisins. I don't know about you, but I don't like raisins in my cinnamon rolls. I am more of a nut person (that sounded funny). Bring on the nuts!!
I bet the Sweden's or the Philadelphia-style do not use mashed potatoes in their dough....
Cinnamon Rolls
1 cup mashed potatoes, instant or real (I used real)
1 cup milk
1/2 cup plus 1 TBS sugar
1/2 tsp salt
2 oz. (1/2 stick) unsalted butter, cut up
1/4 cup warm water or potato cooking water, 105-115 degrees F
2 1/4 tsp. active dry yeast
1 large egg
1 tsp. vanilla extract
about 4 1/2 cups all-purpose flour
Heat the mashed potatoes and milk in a small saucepan. Stir in the 1/2 cup sugar, the salt, and the butter. Heat and stir until the mixture is 105-115 degrees F. The butter does not need to melt completely.
In a 1 cup glass liquid measuring cup, stir the warm water with the remaining 1 TBS sugar, sprinkle in the yeast and stir briefly with a knife. Set aside for about 10 minutes or until the mixture rises to the 3/4 cup line.
In a small bowl, beat the egg and vanilla.
Transfer the potato mixture to the bowl of an electric mixer fitted with the paddle attachment. Add the yeast mixture and the egg. On low speed, gradually add 3 cups of four. Beat on low speed for a minute or two. Remove the paddle attachment and replace with the dough hook. Add an additional 1 1/4 cups four. Continue to knead on low speed for about 5 minutes, adding up to 3/4 cup additional flour to make a dough that is not too dry and not too sticky. The dough should stick to the bottom of the bowl, but not to the sides of the bowl while kneading.
Place the dough in a bowl sprayed with Pam and then lightly spray the top of the dough as well. Cover with plastic wrap (don't let the plastic wrap touch your dough. It sticks...) and place it in a warm place to rise for 1 to 1 1/2 hours until the dough has doubled in volume.
Punch the dough down and transfer to a floured board. Cover it loosely with plastic wrap and let rest for 10 minutes. Meanwhile, spray a 9x13 pan with cooking spray.
Roll the dough to an 18 inch square with floured rolling pin. Spread the dough with butter and sprinkle o the cinnamon sugar mixture. Roll the dough like a jelly roll and pinch the seam to close. Shape the log with your hands to obtain an evenly thick log. With a sharp knife (floured if sticking), cut the dough into 12 even pieces. Place the rounds into the 9x13 pan with 3 rows of 4 buns. Cover loosely and allow to rise for 1 hour. Meanwhile, preheat the oven to 375 degrees F. Bake the buns for 20 minutes (mine took about 17) until the buns are a nice golden brown. Let stand for 5 minutes. Drizzle with glaze.
Filling:
2 TBS granulated sugar
2 tsp. cinnamon
1/2 tsp. nutmeg
4 TBS butter, melted
3/4 cup nuts of your choice chopped fine. I used some Spanish peanuts that I had on hand.
Melt the butter in a bowl. In another bowl combine the cinnamon, sugar, nutmeg, and nuts.
Sometimes people like the filling to be strong, so you could probably double the filling ingredients for more flavor (not the butter though).
Glaze:
1 TBS butter at room temperature
1 cup confectioners sugar
A couple shakes of cinnamon
1/4 tsp. vanilla extract
1/4 tsp. almond extract
2 TBS French vanilla liquid coffee creamer
Beat or whisk all ingredients together until smooth. Add more cream or confectioners sugar to adjust the consistency. It should be thick, but pourable.
Make sure you read through all of the directions before you get started. When I try a new recipe I make notes all over it so I don't get lost. These cinnamon rolls are absolutely amazing!! You will not be disappointed.
Good Luck~Happy Eating~Enjoy

Posted by Alil Country Sugar at 11:41 AM

Email ThisBlogThis!Share to TwitterShare to FacebookShare to Pinterest
Labels: Bread and Quick Bread