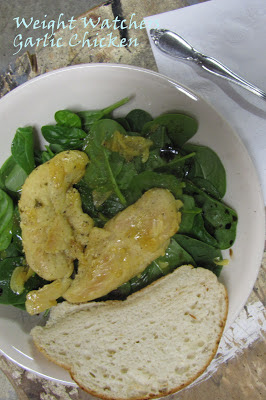 It's a new year,
a new you,
and to help you out,
I'm going to bring you Weight Watchers recipes on Mondays.
Monday is a good day, right?
That way we cover the weekend binges and get back on track
for the week.
And it's okay to binge.
You just get back on track the next day.
One of the hardest things to accomplish is change of habit.
When I gave up drinking pop (soda, Pepsi), I thought I was
going to die.....
For real! I didn't think I would make it.
And yes, I fell quite a few times before I was finally able to change
that habit of drinking Pepsi.
I have not drank any pop for over 17 years.
And my body thanks me for the change. 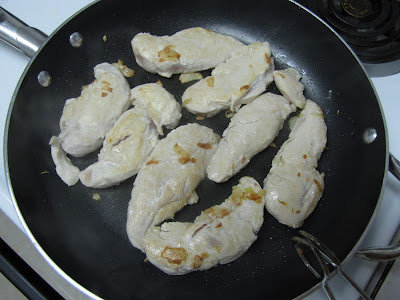 This Weight Watchers Garlic Chicken is over the top awesome.
There is so much flavor.....
Let me tell you what I did to make this.
I used chicken tenders instead of half chicken breasts.
I used 8 of them and browned them in a little olive oil and garlic.
The recipe below will walk you through it. 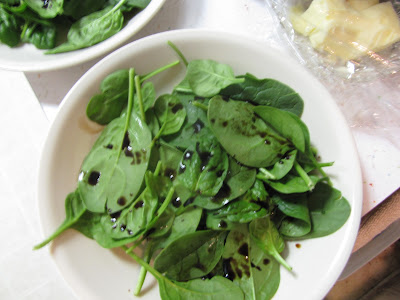 I decided to serve my garlic chicken on top of a bed of fresh baby spinach.
I used maybe a cup and a half of spinach.
Just enough to cover the bottom of my salad bowl.
Then I drizzled the spinach with Balsamic Vinegar.
You can see that I didn't use much vinegar, just a sprinkle for flavor. 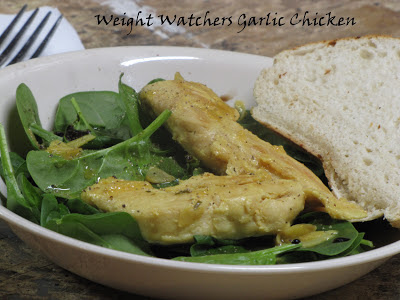 I then laid 2 chicken tenders on top of the spinach and used some
of the lemon sauce to drizzle on top.
The hot chicken and sauce wilted the spinach to perfection, while
there were still some crisp leaves.
I also served this dish with a slice of Asiago Cheese Take and Bake bread.
Which, I will give you calorie details below.

Using a nonstick skillet smeared with just enough olive oil to coat the pan. Slowly saute garlic and lemon zest over low heat. Add chicken tenders and cook over medium heat, about 10 minutes or until brown on both sides. Add broth and lemon juice.
Heat to boiling and then reduce heat. Cover and simmer 10 - 15 minutes or until chicken is done. Remove chicken from pan and place on a plate. Line salad bowls with about 1 1/2 c. fresh baby spinach. Drizzle spinach with balsamic vinegar. Place two chicken tenders on top of spinach and drizzle with sauce left in pan. Sprinkle with crushed black pepper and serve.

This recipe is linked to:
Weekend Potluck ~ The Better Baker
Posted by Alil Country Sugar at 3:30 AM